Who Exactly Is Running This Country?

My latest musings involve our legislative processes both at the State and Federal level. My lobbyist friends may not like what follows. There was time, not long ago when our legislators owed their fealty to their constituents and to their party. It now seems that loyalties are owed more to special interests than their constituents. I have three examples for your consideration. 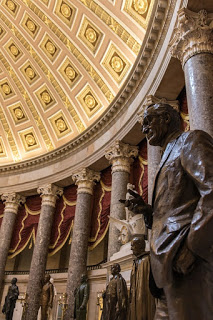 At the last Western Stock show, I sat down at a table with a lobbyist I have known for many years. He told me he was meeting his client and that I would also enjoy meeting her. The client was our Governor's point person who chaired the committee which finds Colorado citizens to serve on Boards and Commissions. When I asked why this committee needs a lobbyist, I was told that the Governor needed a person at the legislature to lobby for his appointments. So as a taxpayer, I am paying for a lobbyist to communicate with elected representatives to approve other citizens to serve on largely non-paying boards and commissions in case special interest groups might object. Just recently I read in the Denver Post that the Secretary of State announced that he had neither the budget nor personnel to regulate the lobbying industry. The legislature did pass a body of regulations to govern lobbyists but right now it barely serves to register the lobbyists and see to it that they pay their nominal registration fees. Everyday we see the work of lobbyists whether it is over rain barrels, sales of wine in grocery stores or the ban on marijuana edibles. Could it be that we have abandoned our Republic for a body of special interest handmaidens called lobbyists who have little to no oversight?

The second example is at the Federal level. Surprisingly there is strong bipartisan support for the Sentencing Reform Act of 2015. The bipartisan support is composed of a coalition of strange bedfellows. It unleashes the lobbying forces of the nation's most prominent conservative and progressive organizations, over 200 in number, to bring about sentencing reform. The legislation is, however, being held up by, a small but apparently equally strong lobbying force of a special interest group out to protect business in general and the financial industry specifically, from white collar crime prosecution. The amendment would require an element of proof (mens rea, a conscious awareness of one's actions) in all white-collar collar prosecution. This special interest group wants to insert this unrelated provision in the Sentencing bill to mostly protect a small group of corporate executives. So we have another example of a legislative body deferring to a special interest rather than the constituency at large.

Just one more example of lobbying abuse in DC. There is an army of lobbyist regularly appearing before and supplying information to the various agencies charged with providing detailed regulation to enforce acts of Congress. I often hear the argument made of overregulation that strangles business and innovation. Perhaps we should consider reforming the administrative process and relieving the administrative agencies from lobbying pressures.

These are just a few examples of how I believe our legislative process is being overrun with special interest and lobbyists. What are your thoughts on our current state of the state relating to these matters?